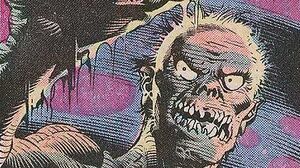 Thousands of years ago Zhuvan D'ark made a pact with dark gods. He was judged unfit to take the pilgrimage down the River Iss and sealed away in the desert to await death, but the pact he made would not allow him to die, although his body grew old and began to rot. Although alive he was trapped, he waited for thousands of years but no intelligent creature he could draw power ever came close to his place of imprisonment, until Sola arrived. With his freedom and power he built a City of Skulls and an army of undead skeletons to invade Helium.

Retrieved from "https://barsoom.fandom.com/wiki/Zhuvan_D%27ark?oldid=11865"
Community content is available under CC-BY-SA unless otherwise noted.