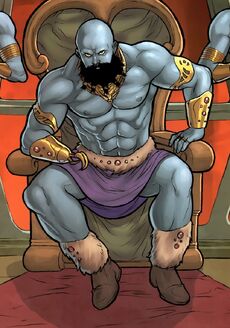 Xen Brega is a Barsoomian Moon pirate. Like most of his race, he is a pirate. He at one point was the slave of Phondari, however, when Phondori violated the laws of the moon pirates she became Xen Brega's slave, and he quickly rose through the pirate ranks. He mistreated Phondari and her younger brother Joktai, going so far as to have the boy's tongue cut out. The siblings escaped and became independent pirates, with Phondari as captain of her own ship, Jedessa's Revenge.

Some time later, after Phondari had captured Princess Dejah Thoris of Helium, Xen Brega captured Jedessa's Revenge and sent them all to the kitchens to be butchered and eaten. Joktai managed to cut himself and the others free and kill Xen Brega's chefs and some of his crew, and the pirates and the princess slipped through Xen Brega's fingers. The furious pirate chased them to Barsoom's South Pole, where he discovered and claimed the legendary Lost Treasure of Segotha. His victory was short-lived, however, as the treasure's monstrous guardian killed him.

Retrieved from "https://barsoom.fandom.com/wiki/Xen_Brega?oldid=13206"
Community content is available under CC-BY-SA unless otherwise noted.