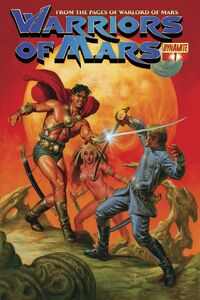 Warriors of Mars is a comic series released by Dynamite entertainment, it is essentially a spinoff of their Warlord of Mars. The comic is a crossover of Gullivar of Mars, and John Carter of Mars. The first issue is was released in February 2012, and features cover art from Joe Jusko.

Before Carter arrived on Mars Lieutenant Gullivar Jones came to the red planet, having traveled through time arriving at roughly 1400 years before Carter. He arrived upon a magic carpet seeing a savage world of red men and beautiful Princesses.  Certainly he is not the hero Carter is, but now these two legends will meet.

Retrieved from "https://barsoom.fandom.com/wiki/Warriors_of_Mars?oldid=11876"
Community content is available under CC-BY-SA unless otherwise noted.