Warhoon is one of the Green Martian hordes that inhabit Barsoom, like all hordes taking their name from the dead city they consider their capital.

The Warhoons have been the mortal enemies of the hordes of Thark for as long as anyone can remember, but they've long been outmatched by the Tharks in terms of technology, resources, and population (Warhoon having twenty thousand martians total). The Warhoons have territory in both the northern and southern hemispheres. As a whole the Warhoons are far more savage than the Tharks, their ornaments including the skulls and dismembered hands of their fallen foes.

The below information is not from the works of Edgar Rice Burroughs and therefore isn't considered canon. 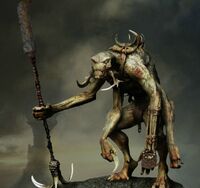 In the universe of the Disney Film, the Warhoons are portrayed as being a sub-race of the green martians (whereas in the book all hordes are physiologically identical). They are hunched over, have gnarled and crooked tusks, and are physically more robust than the Tharks. Tal Hajus is said to be half-Warhoon in this version, explaining his size, brutality, and strength.

Like their counterparts in the books they are highly scarred and violent individuals who frequently fight among themselves. They occasionally seem to take Banths as war-mounts, and are said and shown to be subterranean in most sources, living in underground cities and caves.

Many Warhoon characters appear in this series, many of them having allied themselves with the Council of Five.

In Marvel's most recent adaption of the original book A Princess of Mars, Warhoon is re-imagined as a city under the control of the Tharks. There is no mention of any cultural or political differences, and the city is home to a great arena.

Retrieved from "https://barsoom.fandom.com/wiki/Warhoon?oldid=13301"
Community content is available under CC-BY-SA unless otherwise noted.