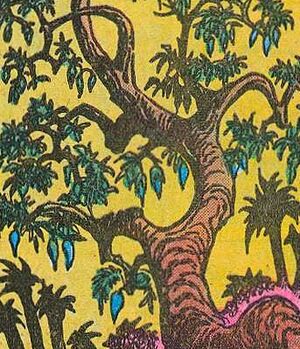 The Tree of Life is the focus of the Black Martian creation myth. According to their religion, in the beginning, all life was directly connected to the Tree of Life.  This tree supposedly flourished in the center of the Valley Dor twenty three million years before John Carters's return to Barsoom. The black martians being born first from its boughs, and according to their myths, all other life is the bastard offspring from combinations of their race and the other two that came approximately the same time.

The last race to fall off the tree according to their myth was the Plant Men. Now the tree has long since passed.

Almost all educated martians believe the Tree of Life to be the source of life upon their planet, though it is doubtful that the specifics of the black martian version apply to everyone.

Retrieved from "https://barsoom.fandom.com/wiki/Tree_of_Life?oldid=13935"
Community content is available under CC-BY-SA unless otherwise noted.