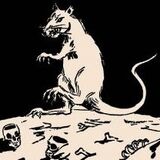 The three legged rat as its name suggests has three legs, two in the back one in the front. They can have pink or green eyes. They are clearly not the same species as ulsio. A group of these rats living below the dead city of Korvas, have become somewhat intelligent, building huts and performing strange rituals. Apparently they are disliked a great deal by martian birds, malagors flee at the sight of them.

Retrieved from "https://barsoom.fandom.com/wiki/Three_Legged_Rats?oldid=7782"
Community content is available under CC-BY-SA unless otherwise noted.