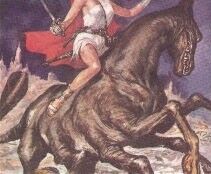 Thoat is a term that refers to several closely related species of eight-legged horse-like creatures native to Barsoom.

A thoat is a long, sleek creature with eight legs, a broad flat tail (that is less wide at the root than it is at the tip), and a large mouth that splits their head nearly in half. Thoats are slate in color shading into yellow at the feet, and their bellies are white. The thoats survive almost solely on the yellow moss that covers much of the surface of Mars. The stems of the moss contain sufficient moisture for the needs of the thoats, but they can exist for months at a time without water.

Two primary species of Thoat are known, the smaller breed (about the size of a horse) which is an exact replica in appearance of the larger far more dangerous variety which stands ten feet at the shoulder. The smaller breed of Thoat is divided into many more breeds, there are riding varieties, and beef varieties (that truth be told vary little in appearance). There is also a rare white variety. One of these white thoats is owned by Thuvan Dihn, Jeddak of Ptarth, and was ridden by him when he visited the city of Kaol in The Warlord of Mars.

When John Carter first saw the thoats they appeared as dangerous and vicious as the Green Martians. Through little effort on John Carter's part, he was able to gain the affection and love of the thoats.  They then became loyal and would follow him around like dogs, seemingly showing that the thoats foul temper was the result of abuse at the hands of the Tharks.

Both the Red and Green men of Barsoom have domesticated Thoats, for the purposes of food and transportation. Naturally, the Greens use the much larger variety, and the reds use the smaller. There is a difference in the manner in which the two races treat the Thoats, Greens tend to treat them very cruelly.

A Black and White Depiction of a Thoat

A Red Thoat of the Larger Breed

A Trio of Thoats from the John Carter Movie
Add a photo to this gallery
Retrieved from "https://barsoom.fandom.com/wiki/Thoat?oldid=14786"
Community content is available under CC-BY-SA unless otherwise noted.