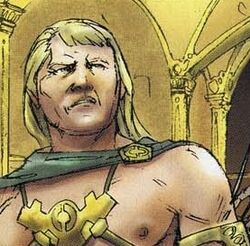 Therns are a White Martian race who inhabit the area surrounding the Valley Dor. Whether or not they have any relation to the other white races, such as the Orovar or the Lotharians, is unrevealed.

The skin tone of the therns is identical to that of Caucasian humans from Earth; at a glance they appear as blue-eyed, blond-haired humans. Closer inspection reveals the hair upon their head to be a well made wig. They wear these as their bodies are entirely hairless, as it is considered disgraceful to not wear this wig. Up until they were exposed as frauds by John Carter, the popular belief was that they were descendents of the original White Martians, at odds with what the Black Martians, the therns' greatest enemies, claim: therns arose from a union of their kind and white apes. Generally, this race seems to wear more clothing than other Martian races, as members are noted wearing robes.

Though not especially industrious, the therns amassed great power over the centuries through their promotion of the cult of the Holy Therns, which preached that the way to paradise lay in the Valley Dor. For centuries, Martians of all colors headed down into the valley, only to find a land heavily populated by white apes and plant men, whom the therns had trained to attack the unwitting pilgrims. The few who survived this horror, like the Princess Thuvia of Ptarth, became enslaved by the therns, toiling away for years until the therns decided that they had outlived their usefulness, at which point they were killed and served up to the leaders of the Holy Therns. Ironically, the therns themselves had been fooled; the First Born had convinced them that the real way to paradise lay in the Temple of Issus, which lay in the Omean Sea, the stronghold of the Black Martians.

For centuries, the Holy Therns lured unsuspecting Martians to their deaths, their own civilization thriving but for the occasional raids of the black pirates. These raids always ended in the kidnapping of both white and red women, but the therns dared not fight back; their first and only attempt to attack the First Born resulted in a brutal reprisal.

Their civilization's downfall came when the earthman John Carter, long believed to have died saving all of Barsoom from oxygen starvation, suddenly appeared in the Valley Dor in 1886. By strange coincidence, his old ally Tars Tarkas had been sent to the valley to find him and, as with so many other unfortunate Martians, he and several other Green Martians were attacked by plant men and white apes. Carter intervened to save the great Thark's life, and at length, their efforts to escape from the beasts led them to one of the therns' bases. After still more fighting, Carter and Tars Tarkas met Thuvia, and together attempted to escape. That night, however, happened to be the occasion of one of the black pirates' raids, and in the ensuing chaos, the therns lost Phaidor, daughter of their leader, Matai Shang. She (along with Carter, who had also been captured) was brought before Issus, the false goddess of both the First Born and the therns. She was forced to look upon the hideous old woman, and sentenced to serve as a slave for one year before being killed and served up for the ancient woman's consumption, but attempted to force Carter to share her fate by telling Issus of his fighting prowess, which caused him to be sentenced to death in a combat arena.

Carter escaped, and Matai Shang sought to stop him from spreading the truth about the Valley Dor. When Carter eventually led the Heliumetic navy to war with the First Born, the therns attempted to intercept his fleet, and instead ended up in battle with the First Born. Carter took advantage of the situation and led a two-pronged attack on both the Valley Dor and the Golden Temple of Issus, the latter assault leading to the death of Issus herself. In short order, the therns lost both their naval forces and their goddess.

After Issus was overthrown, the therns were a broken and scattered people. Some remained loyal to the Holy Therns, but they were few and they found friends only in the most remote kingdoms, such as Kaol, where news of their fraud had not arrived. Many others swore alliance to Xodar, their admiration for his fighting prowess winning out over their centuries-old hatred of the black men, found guidance under a new leader, or became panthans - mercenaries who swore allegiance only to their latest client. Still others integrated into red Martian society.

Prior to their downfall, the therns' religion was complex and shared many similarities to the primary religion of greater Barsoom and that of the First Born. Like the Black Martians, they believed themselves superior to all other Martian races, to the point that they saw nothing wrong with consuming the flesh of the "lesser" races, and worshiped an individual they believe to be godlike. At the age of one thousand years, every thern would travel to the Temple of Issus, believing that it was the true way to the Heaven (that they had used a similar ruse to lead red and green Martians to their deaths did not give them any pause.) They believed that if they died before they reached one thousand years of age, their soul would pass into a plant man to live out the remainder of the thousand years. If the plant man died before the final hour of the thousand years, then the soul would supposedly pass into the body of a white ape. If the white ape died then their soul would pass into a Silian and be lost forever. The consuming of human flesh was ritualistic amongst the race, and they would not consume the flesh unless it had died being drained of blood and life by the horrid plant men, as they believe the plant men drained the tainted life from the body.

Retrieved from "https://barsoom.fandom.com/wiki/Therns?oldid=13325"
Community content is available under CC-BY-SA unless otherwise noted.