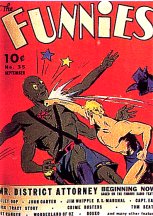 The Funnies was a series of anthology comics from dell comics, twenty six of the issues featured stories based on Edgar Rice Burroughs mars series (issues 30-56, a story was intended for issue 57 but was never published apparently). Many of these comics were illustrated by John Coleman Burroughs. These comics share artwork with both the sunday strips, and one of the big little books.

The story begins as an adaption of a princess of mars

Read Many of the comics online.

Retrieved from "https://barsoom.fandom.com/wiki/The_Funnies?oldid=10779"
Community content is available under CC-BY-SA unless otherwise noted.