"Leave to a Thark his head and one hand and he may yet prevail." 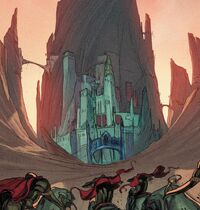 Thark is a Green Martian tribe and kingdom founded (like all green kingdoms) in one of the dead cities abandoned during the fall of civilization upon Barsoom.

The hordes of Thark consist of about thirty thousand martians, divided amongst twenty five communities; five of the communities making their home in the city of Thark (each community assigned a section of the city), the balance of the horde spread out in the territory claimed by the hordes current Jeddak. The city itself is larger and grander than the city of Korad.

Sociologically, the Tharks are an interesting study in contradictions. On the one hand, they, like all Greens, are warlike and cruel, and under the reign of Tal Hajus, there were serious considerations about the effectiveness of rape as a tactic for demoralizing female captives. On the other hand, they have a strong code of honor to which even Jeddaks must adhere. After Tal Hajus was killed by Tars Tarkus, and with the advice of the Earthman John Carter, the Tharks entered a new age in which base cruelty took a back seat to more diplomatic means for gaining resources.

The Tharks have long been at war with the Warhoons, whose savagery is unparalleled among the Green hordes. They also possess a great hatred for Zodanga, as Jeddak Than Kosis made some very serious efforts to wipe the Tharks out by attacking their incubators.

It was among the Tharks that John Carter earned his earliest honors and met the princess Dejah Thoris. His presence evoked serious change in the Tharkian horde in strange and unexpected ways, his first big contribution was teaching them to care for their thoats in a way that would make them far more reliable mounts. He then helped overthrow the Jeddak Tal Hajus, and later helped secure an alliance between this horde and the kingdom of Helium