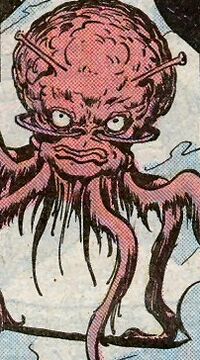 Taak is a Kaldane king that rules over all of Bantoom, and it was at his insistence that the Kaldanes abandoned all emotions. Highly intelligent, ambitious and ruthless, he developed a means to surgically combine Kaldanes with other Martian races. Taak intended to infiltrate Red Martian society with human-seeming Kaldanes, with the goal of eventually conquering all of Barsoom. He was opposed by John Carter, Tal Tarag, a Red Martian whose brain he had placed in the body of a White Ape, and a renegade Kaldane named Aard, whose lover, Saar, had been surgically transplanted onto the body of Tarag's lover Vala Dia. When faced with these enemies, Taak proved to be a formidable opponent. He was able to telepathically command Aard to come to him, where he struck the renegade down, but he had no such power over an enraged Tal Tarag, who slew him at the cost of his own life.

Retrieved from "https://barsoom.fandom.com/wiki/Taak?oldid=13637"
Community content is available under CC-BY-SA unless otherwise noted.