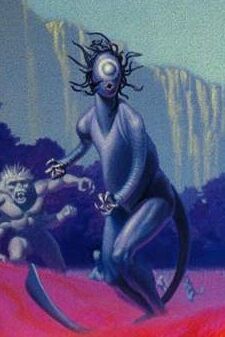 The Plant Men are a semi-vampiric race of blue-skinned bipeds who inhabit the Valley Dor on the planet Barsoom.

The adults of the species can grow to a height of ten to twelve feet standing erect. The children of the species grow out from the parents' armpits, appearing identical to the adults. They are cycloptic, possessing only one eye in the center of their faces. The eye is pure white, with no apparent iris or pupil. There is no mouth in the head, and the nose consists of one nostril, which resembles a bloodless bullet wound. The head is covered with thick black hair, which can grow to a length of eight to ten inches. Each hair is about as thick as an angleworm and moves independently of the others; these act as the creature's ears. The rest of the body is humanoid in shape, but the feet are three feet long and very broad and flat, and the arms are short and undulating, not unlike an elephant's trunk. The hands are tipped with razor-sharp claws, and in each palm lies a mouth; the claws shred the leaves and grasses that make up the bulk of the plant men's diet so that they can be easily swallowed. Completing the anatomy is a tail which is round at the base but becomes flat at the tip. The "blood" of a plant man is green and sticky, resembling syrup.

The plant men travel in packs, using their broad feet to launch themselves into the air, not unlike the earthly kangaroo. The brain is only slightly larger than the tip of the pinky of an adult human, and is only capable of directing the plant man's movements and processing what they see and hear. They are incapable of any sort of reasoning, acting only on instinct. Their diet consists of plants and blood from animals. If threatened, they leap into the air and strike their foe with their tails, which are so strong that one blow can crack the skull of a Green Martian as if it were an egg.

For centuries, the plant men worked in a loose coalition with the local white apes and the Therns to ensure their survival. The cannibalistic Therns relied on human flesh to provide their protein, but their religion forbids them to consume blood. The vampiric nature of the plant men thus made them an essential part of the valley's ecosystem. The Therns drew Martians to the valley by claiming that it was the entrance to Heaven (and given that the valley is rich with water and vegetation, and surrounded by gold, bejeweled mountains, the Martians had little reason to question such claims.) However, upon seeing the Martians enter the valley, the Therns would give a terrific shriek to attract the attention of the plant men and the apes. The plant men would attack the victims, smashing them and tearing their flesh and then drinking their blood. After they were sated, the apes would move in to tear off the limbs and head, and much of the skin and muscles. Whatever remained was taken by the Therns to be eaten by their leaders. This scheme was eventually exposed by the Earthman John Carter, and so now the plant men rely on the apes to satisfy their craving for blood. In addition to relying on the plant men to "cleanse" their food, the Therns also believed that if they died before reaching a thousand years of age, their soul would pass into a plant man.

The Black Martians, who believe themselves to be the oldest race on Barsoom, say that the plant men were born directly from the Martian Tree of Life. They say that the plant men bloomed from the same buds that produced the pink-worm, the ancestor of the white ape species, and the primeval black man, but whereas the buds' other occupants eventually broke out and roamed the world, the plant men remained attached to the tree, dangling from it by the stems on top of their heads. When the Tree of Life began to die, the plant men figured out how to break off from their stems, and also discovered they could cause new plant men to grow from their armpits.