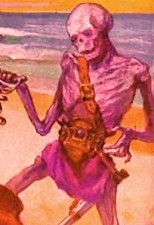 The morgors are one of two native races to Eurobus, the morgors have a rather ghoulish appearance and are sometimes known as the skeleton men of Jupiter. These skeleton men have thin parchment like skin is very tight making them appear skeletal, the slight transparency makes their internal organs visible.

The Morgors are an extremely warlike race. Their every thought is of war, and their entire society is dedicated to it. They have absolutely no interest in things like art, music and literature. This is reflected in their clothing and architecture. All Morgors, even influential ones like military commanders and emperor Bandolian, dress in very simple harnesses that feature no ornaments or jewellery other than a small metal plate with a hieroglypth that indicates a Morgors rank. Their cities consist of gloomy, brown buildings built of volcanic rock, with no vegetation. Military training of new soldiers is very harsh. At the end of their education, new soldiers have to pass a graduation exam by fighting prisoners in an arena in a duel to the death.

Although they do fight in man to man combat with swords, U-Dan warns John Carter that the Morgors also have lethal weapons of which Barsoomians know nothing. These wepaons however are not described in any detail in the book. The Morgors also have space ships, which are not only capable of interplanetary travel, but can also be rendered invisible by coating them in submicroscopic, magnetic sand composed of prismatic crystals.

Group of Morgors - John Carter, Warlord of Mars
Add a photo to this gallery
Retrieved from "https://barsoom.fandom.com/wiki/Morgors?oldid=13965"
Community content is available under CC-BY-SA unless otherwise noted.