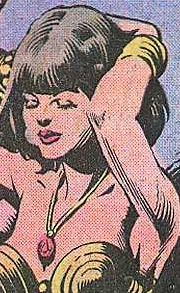 Lyssia was a red Heliumite who was a romantic interest of Kantos Kan. She was superstitious, carrying an soul-stone with her that could supposedly predict the future. It predicted a death, so she was hesitant to pursue romance with Kantos Kan thinking it was his death it predicted. She desperatly wanted Kantos Kan to leave the service of Helium so he would be safe.  Her father even offered Kantos Kan a job as a weapon maker. She would die when Helium was assaulted by Stone Snakes, being tuned to stone by their horrible powers

Retrieved from "https://barsoom.fandom.com/wiki/Lyssia?oldid=11789"
Community content is available under CC-BY-SA unless otherwise noted.