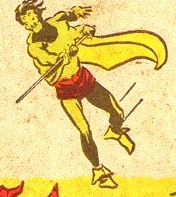 Lug Molo was a Green Martian who fought in the Warhoon arena with John Carter and Kantos Kan. Carter commented that he was one of the most ferocious fighters he had ever seen. When there were only four opponents left in the arena he teamed up with fellow green martian Sak Kola to fight Kantos Kan and John Carter. Sak Kola attacked Carter, and Lug Molo attacked Kantos Kan. Lug Molo nearly gained the advantage over Kantos Kan but John Carter threw his sword into the green martian's chest killing Lug Molo, and saving Kantos Kan's life.

Retrieved from "https://barsoom.fandom.com/wiki/Lug_Molo?oldid=13197"
Community content is available under CC-BY-SA unless otherwise noted.