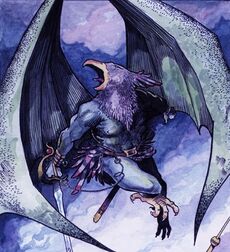 The klangan (klangan plural, angan singular) are the mellow voiced bird men of Amtor. The name Klangan in the language of Amtor literally means birdmen. The birdmen are considered an inferior race, they exsist as slaves to the thorists. They are said to have little intelligence and no imagination and to be motivated only by primitive emotions such as hunger, love, fear, self-preservation, and hate. They have no initiative and have absolute loyalty to whoever their master is, they do not care who that master is in the slightest. by the humans of the world.

The klangan have dark skin, low receding foreheads, large beaklike noses, undershot jaws, and small close set eyes. The ears of this race are flat and pointed. Their chests are large and birdlike, the lower part of their torso is smaller, and they have narrow hips. The arms are long, with long fingers and heavy legs. The legs are short and stocky, ending in three toed feet with long curved talons. On their heads they have feathers instead of hair, these feathers are uniform in color starting at the root they are white, then a band of black, then a band of white, the tip of the feather is red. These feathers are flat against the skin of the angan, unless they are excited then the feathers stand erect. Feathers also grow on the waist at the groin, and near the buttocks. There is a large number of feathers above the buttock that are part of the races tail, they use these feathers for display.Their wings are are very batlike in appearence and structure, they are capable of flying for hours nonstop, even when carrying humans. At a glance one would not think that their wings would be capable of carrying their own weight, but Amtor's lower gravity, and the Klangans hollow bones aid them greatly.

Retrieved from "https://barsoom.fandom.com/wiki/Klangan?oldid=13892"
Community content is available under CC-BY-SA unless otherwise noted.