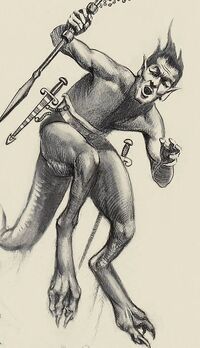 The Kangaroo Men, or Goolians, are an arrogant Martian race that exists in very small numbers upon the Island of Ompt in the Toonolian Marshes. Though they believe themselves to be the bravest and strongest of the Martian races and like to boast about their leaping abilities, they are in fact inveterate cowards and sloths, and as such, they are very isolated and play virtually no role in Martian politics. They hoard massive amounts of shells from their beaches, and it is widely believed that they consider these shells to be valuable treasure, but in truth, they have consciously assigned value to the shells to ensure no other race will plunder their tiny "city" Gooli.

Though like most Martians they go about armed at all times, typically with a spear, sword and dagger, a Goolian will only fight if backed by at least ten others of his kind, and even then he is far more likely to flee in terror if the enemy appears even slightly dangerous.

The Goolians have at least one major enemy, a brutal humanoid tribe known as the man-eaters. The vicious man-eaters terrify the Goolians, who propitiate them by giving them five sacrificial members of their tribe at an arranged time in return for the savages not killing them all, burning their village and taking their women. It is unclear if this practice continued after the Red Man-turned-Hormad Vor Daj killed three man-eaters and drove off the others when they came to collect their sacrifice. One of those unlucky enough to chosen as a sacrifice told Vor Daj that if they fled along with the rest of their tribe, they would be tortured to death, thus ensuring that the normally cowardly creatures would do their 'civic duty'. After the battle, the Goolians claimed all credit for the victory, though they were very happy to let Vor Daj remain to protect them.

They seem psychologically unable to accept that they are not in fact a brave, mighty, wealthy people, even rationalizing panicked flight as heroic strategy. The Goolian Zuki admitted that they collected shells as treasure because it was unlikely anyone would attack them to gain such petty items, but he could not comprehend the fact that his Jed was not a master tactician and that his people were cowards. Vor Daj claimed that the Goolians, excepting Zuki, had no sense of humor. He seems to have been referring more to an ability to accept, or even realize, their own nature as weak, pitiful cowards rather than a lack of comical sentiment.

They are ruled by a Jed named Anatok, a vain coward who sees himself as the mighty Jeddak of the greatest city on Barsoom. How he achieved his rank is unknown, it may be hereditary, as the Goolians as a people are not likely to risk their lives battling for political positions.

Anatok - Jed of Gooli, he took Vor Daj and Janai prisoner and sentenced them to live as slaves, but was intimidated into freeing them after the 'Hormad' drove off the man-eaters.

Zuki - Goolian 'Warrior', he challenged Vor Daj to a duel, but fled at the sight of the man-eaters. He later befriended his former opponent.

The Kangaroo Men are essentially Human from the waist up, but they have powerful legs and long tails. Their powerful legs allow them to make great leaps and bounds (not too different from the dreaded Plant Men). They are one of only two known marsupial species upon Barsoom (the other being a small reptile) and like all Martian races they are oviparous carrying their eggs in their pouches. Once hatched the young remain within the pouch until they can fend for themselves.

Because they carry and protect their young in pouches, they view non-marsupial females as "half-women" who cannot properly care for their young.

Retrieved from "https://barsoom.fandom.com/wiki/Kangaroo_Men?oldid=12541"
Community content is available under CC-BY-SA unless otherwise noted.