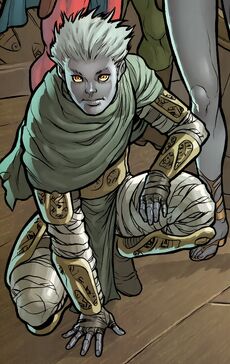 Joktai is a youthful moon pirate native to the planet Barsoom. He was a crewmember aboard his sister Phondari's ship, Jedessa's Revenge. At some point he, along with his sister, had been a slave to Xen Brega, who cut out Joktai's tongue. When Phondari escaped Xen Brega's clutches, she took Joktai with her, making her younger brother part of her pirate crew. Jedessa's Revenge made many raids upon Southern Helium, and eventually captured the city's Southern Pumping Station. When Deja Thoris came to investigate, Phondari sent Joktai to sabotage Deja Thoris' ship and lead her into a trap, whereupon the pirates took The Princess of Helium and her crew hostage. But the pirates themselves were then captured by Xen Brega, who imprisoned them all in his ship's galley, planning to eat them. Joktai, however, had a hidden knife and cut himself free, attacked and killed the chefs and guards, freed the others and escaped. Though he was shot in the shoulder during the chaos, he was not seriously hurt and fled with the others aboard Jedessa's Revenge.

Joining forces with Dejah Thoris, the moon pirates traveled to Barsoom's South Pole in search of the legendary Lost Treasure of Segotha. Xen Brega and his crew beat them to the treasure, only to die at the tentacles of the treasure's monstrous guardian. Joktai, his sister and the others survived to claim the treasure for themselves. The pirates then split the treasure with Dejah Thoris and went their separate ways.

Joktai is far more than just the harmless young boy he appears to be. He is a remarkable fighter, capable of killing several armed pirates in a matter of seconds using nothing but a small knife. He was able to plot and carry out the escape from Xen Brega from the moment of his capture. He was also able to sabotage Dejah Thoris' ship and lead her into a trap. He is a strong, highly intelligent and cunning young pirate. He does have a playful side, though, when allowed the luxury of play.

Joktai wears a great deal more clothing than most Barsoomians, especially those depicted in the adult-oriented Warlord of Mars Dynamite series.

Retrieved from "https://barsoom.fandom.com/wiki/Joktai?oldid=12286"
Community content is available under CC-BY-SA unless otherwise noted.