For a database dedicated to the film, please visit the films wiki

John Carter of Mars is an American science-fiction fantasy film about John Carter, the lead character in much of Edgar Rice Burroughs' 11-volume Barsoom series. It is directed by Andrew Stanton and stars Taylor Kitsch as Carter. This is Stanton's first foray into live-action after working on animated films for Pixar. It was set for a March 9, 2012 release in theaters worldwide.

The film is based on the first story to feature John Carter, a character from A Princess of Mars, which was serialized from 1912 and first published as a novel in 1917. Carter is an American Civil War veteran who goes to sleep in a cave after being chased by Apache Indians and wakes up on Mars, here called Barsoom. Formerly an Earth-like world, it became less hospitable to life due to its advanced age: as the oceans evaporated, and the atmosphere thinned, the planet devolved into partial barbarism with the inhabitants hardened and warlike, fighting one another to survive. Barsoomians distribute scarce water supplies via a worldwide system of canals, controlled by quarreling city-states. The Martian atmosphere is maintained by a power plant. Carter rescues a humanoid Red Martian princess, Dejah Thoris, from the belligerent four-armed Green Martians, whose respect he gains for his superior strength and fighting ability. He enlists the Green Martians' assistance in winning a civil war, and saves Mars from destruction when its atmosphere plant malfunctions.

Animation from the first version to be cancelled 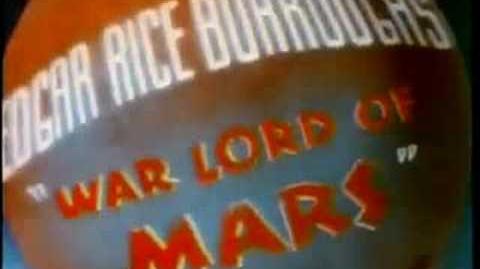 In 1931, Looney Tunes director Bob Clampett approached Edgar Rice Burroughs to adapt A Princess of Mars into a feature length animated film. Burroughs responded enthusiastically to the idea, recognizing live action would have limits to where an adaptation could go visually, but advised Clampett to write an original adventure for Carter.Working with Burroughs' son John Coleman in 1935, Clampett used rotoscope and hand-drawn techniques to capture the action, tracing over the motions of an athlete who performed John Carter's powerful movements in the reduced Martian gravity. Clampett designed Tharks, the Green Martians of Barsoom, which he attempted to give a believable appearance, and produced footage of them riding eight-legged thoats at a gallop, which showed all eight legs in coordinated motion. He also produced footage of a fleet of rocket ships emerging from a Martian volcano. MGM was to release the cartoons, and studio heads were enthusiastic about the series.

The test footage produced by 1936 received negative reactions from exhibitors across the US, especially in small towns, many of whom opined that the concept of an Earthman on Mars was too outlandish for Midwest American audiences. The series was not given the go-ahead, and Clampett was instead encouraged to produce an animated Tarzan series, an offer which he later declined. Clampett mused that there was irony in MGM's decision, as the Flash Gordon series released in the same year by Universal Studios was highly successful, and speculated that MGM thought that serials were only played to children during Saturday Matinees, and the John Carter tales would be seen by adults during the evening. The footage Clampett produced was for many years believed lost until Burroughs' grandson, Danton Burroughs, found some of the film tests in the Edgar Rice Burroughs Inc. archives in the early 1970s. Had A Princess of Mars been released, it may have beaten Walt Disney's Snow White and the Seven Dwarfs to become the first American feature-length animated film.

During the late 1950s, Ray Harryhausen expressed interest in filming the novels, but it was not until the 1980s that producers Mario Kassar and Andrew G. Vajna bought the rights for [[Walt Disney Pictures with a view to creating a competitor to Star Wars and Conan the Barbarian. Ted Elliott and Terry Rossio were hired to write, while John McTiernan and Tom Cruise were approached to direct and star. The project collapsed because McTiernan noted visual effects were not advanced enough yet to recreate Burroughs' vision. The project remained at Disney, and Jeffrey Katzenberg was a heavy proponent of filming the novels, but the rights returned to Burroughs' estate.

In 2001, The Lord of the Rings: The Fellowship of the Ring had revitalized the fantasy film genre. Producer James Jacks was reading Harry Knowles' autobiography, which lavished praise on the unfilmed John Carter of Mars series, and Jacks remembered he had read those novels as a child. He convinced Paramount Pictures to acquire the film rights, only to enter a bidding war with [[Columbia Pictures. After Paramount and Jacks won the rights, Jacks contacted Knowles to advise on the project and hired Mark Protosevich to write the script. In 2003,[Robert Rodriguez signed on to direct after his friend Knowles gave him the script. Recognizing Knowles had always been an adviser to many filmmakers, Rodriguez asked him to officially be credited as a producer.

Filming was set to begin in 2005, with Rodriguez planning to use the digital sets he was using on Sin City. Rodriguez planned to have Frank Frazetta, a popular John Carter illustrator, serve as a designer on the film. However, Rodriguez had created controversy over his decision to credit Frank Miller as co-director on the film adaptation of his comics, and chose to leave the Directors Guild of America. Unable to hire a non-DGA filmmaker, Paramount assigned Kerry Conran to direct and Ehren Kruger to rewrite the script in October 2004. The Australian Outback was scouted as a location. Conran left the film for unknown reasons, and was replaced by Jon Favreau in October 2005.

Favreau and screenwriter Mark Fergus wanted to make their script faithful to the novels, keeping John Carter's American Civil War past and making the Martian Tharks fifteen feet tall (whereas other scripts made them human sized). Favreau explained a modern soldier would not know how to fence or ride a horse like Carter. The first film would have adapted the first three novels, A Princess of Mars, The Gods of Mars and The Warlord of Mars. Unlike Rodriguez and Conran, Favreau preferred using practical effects for the film and cited Planet of the Apes as his inspiration, wanting to use make-up as well as CGI to create the Martian Tharks. However, Favreau's official affiliation with the project was not strong, and in August 2006 Paramount chose not to renew the film rights, preferring to focus on Star Trek. Favreau and Fergus moved on to Iron Man.

The First trailer to ever be released 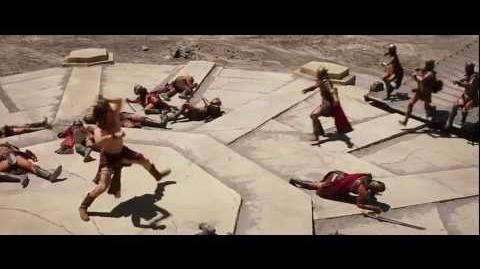 In January 2007, Disney regained the rights, acquiring them this time for Andrew Stanton and writer Mark Andrews. Stanton noted he was effectively being "loaned" to Walt Disney Pictures because Pixar is an all-ages brand, whereas John Carter will be rated PG-13. By 2008 they completed the first draft for part one of a film trilogy. The first film will be based on just the first novel. In April 2009, Pulitzer Prize-winning author Michael Chabon confirmed he had been hired to do revisions to the script.

Having completed WALL-E, Stanton and Wells visited Edgar Rice Burroughs, Inc.'s archives in Tarzana, California, as part of their research. Jim Morris, general manager of Pixar, said the film will have a unique look separate from Frank Frazetta's illustrations, which they found dated. He also noted that although he had less time on pre-production than any of his animated projects, since he had read the novels as a child this made it easier because he had visualized scenes a long time ago.

In February 2010, Oscar-winner Michael Giacchino revealed in an interview he will be composing the score.

Principal photography commenced at Shepperton Studios, London in January 2010 and ended in Utah that July. Locations in Utah included Lake Powell and the counties of Grand County, Wayne County and Kane County, Utah.