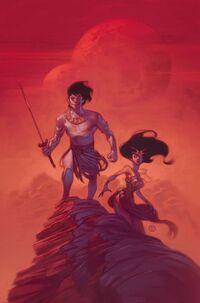 John Carter: The Gods of Mars is the second graphic novel by Marvel adapting the mars series! The creative team on this comic is different, Sam Humphries & Eisner Award winning artist, Ramón Pérez. Like the previous comic, this comic will be considered a level of canon by the Edgar Rice Burroughs Estates!

Retrieved from "https://barsoom.fandom.com/wiki/John_Carter:_The_Gods_of_Mars?oldid=11880"
Community content is available under CC-BY-SA unless otherwise noted.