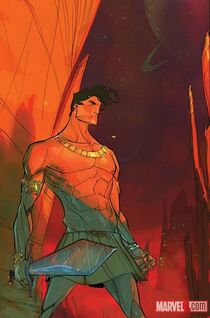 The first in a series of graphic novels created by Marvel adapting the original books. This series is being created with the assistance of the Edgar Rice Burroughs estates (which will be considering the books some level of canon). The first installment of the series is "John Carter : A Princess of Mars" a five issue miniseries, which will be continued in John Carter: The Gods of Mars!

Retrieved from "https://barsoom.fandom.com/wiki/John_Carter:_A_Princess_of_Mars?oldid=10968"
Community content is available under CC-BY-SA unless otherwise noted.