John Carter also known as captain Jack Carter of Virginia, and sometimes even Dotar Sojat. John Carter was the first man from Earth to reach Mars, and became one of the greatest Warlords in the history of Barsoom.

A Princess of Mars

John Carter's history before his advent on Barsoom is mostly a mystery, even to himself. As far as he knows he has always been a man of about thirty, and remembers no childhood. He has always been a warrior with a strong sense of duty, which may account for the honors bestowed upon him by three republics and the decorations and friendships of an old and powerful emperor and several lesser kings, in whose service his sword has been red many a time. When the American Civil War ended he found himself with only a captain's commission in an army that no longer existed and several hundred thousand dollars (Confederate). In an attempt to regain his fortune he traveled to Arizona to search of gold with the aid another Confederate officer James K. Powell.

While in the Arizona desert, John Carter's companion James K. Powell was abducted and killed by the native Apache peoples. In an effort to save the man John Carter found himself chased into a cave where he was inexplicably paralyzed (possibly by the fumes in the cave), fearing for his life he desperately tried to escape being completely unable to move his body. He broke free, and he inexplicably split from his body, as he left the cave he stared into the heavens seeing the red star that is Mars and feeling its calling he was mysteriously transported from Earth to Mars.

Soon after arriving upon Mars John Carter discovered his increased strength and agility. Finding nobody within sight he found his way to a small structure which he discovered was an incubator, this incubator held the hatching green Martian eggs. Soon he was captured by the Tharks, who were greatly impressed with his abilities. Amongst the Tharks, he learned the language of the planet, and developed telepathic abilities while gaining their trust. Carter also taught Tharks to respect their animals (animal cruelty was rampant before) and made a friend with the pet Woola. During his time with the Tharks a fleet of fliers was attacked, the Tharks managed to make a prisoner of one of the fleets human passengers. The princess of Helium, Dejah Thoris. It was also during this time that Carter earned the name Dotar Sojat, a combination of the surnames of two Tharkian warrior chieftains he killed in honorable combat.

After a time with the Tharks, John Carter found himself needing to escape with the princess Dejah Thoris, the two joined with the Thark Sola escaped the city of Thark and found themselves lost. Soon, John carter was apprehended by the horde of warhoon, but not before giving them a fight.

John Carter was captured by the Warhoons and forced to fight in the savage horde's Great Games. During his time with them, he met the red man Kantos Kan and the two were forced to fight each other. The two men stalled until it was dark, and pretending to kill John Carter, Kantos Kan earned his freedom and Carter escaped.

John Carter's lover, Dejah Thoris, was forced into marrying Prince Sab Than whom she did not really love. Sab Than was the prince of Zodanga, which had always been enemies with the people of Helium the homeland of Dejah Thoris.

In an attempt to rescue Dejah Thoris, John Carter and Tars Tarkas led an attack against Zodanga with an army of Tharkian warriors. John Carter arrived just in time to prevent the wedding, then he had a duel with Sab Than, whom he did not kill due to Martian customs. Instead, Tars Tarkas killed Sab Than.

The operators of the atmosphere factory died and their machines were shut down. This caused there to be changes in the Martian atmosphere, it beginning to thin and the inhabitants of Barsoom beginning to die.

John Carter managed to open the doors to the atmosphere factory with the knowledge he had gained on his previous visit to the installation, but John Carter lost his life in exchange. John Carter had died on Mars, but he woke up alive and back on Earth in the Arizona cave where he had been before he was transported to Mars. John Carter, disappointed to be back on Earth, longed to be back on Mars with his lover Dejah Thoris. John Carter became wealthy for serving in the Civil War and bought a house back in his homeland of Virginia, which overlooked the Hudson River. He spent ten years living back on Earth in Virginia, and at night he would gaze at the planet Mars, and imagine Dejah Thoris and a young boy waiting for him there.

When he finally managed to return to Mars, he gave this house to his nephew Edgar and instructed for his own body to be buried in a special tomb that was well ventilated and could only be opened from the inside.

The Gods of Mars

"He was a splendid specimen of manhood, standing a good two inches over six feet, broad of shoulder and narrow of hip, with the carriage of the trained fighting man. His features were regular and clear cut, his hair black and closely cropped, while his eyes were of a steel gray, reflecting a strong and loyal character, filled with fire and initiative. His manners were perfect, and his courtliness was that of a typical southern gentleman of the highest type."

John Carter is a US marine in Afghanistan, that is mortally wounded in war. After he is injured he is informed that he had previously signed an agreement that would allow military experimentation involving telepotation to other planets. He is then transported to the fourth planet in a distant star system called Mars 216, or as it is called by its natives, Barsoom. He is portrayed by Antonio Sabato Jr. who is the first actor to play him on screen. 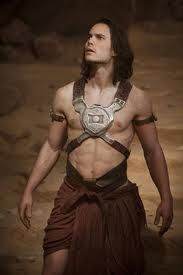 John Carter was a succesful cavalryman in the civil war. When he returned home he discovered that his wife and daughter had died in a house fire. After burying them, Carter left for Arizona in search of gold in the hills. However, he was arrested by Colonel James K. Powell in an attempt to sway Carter in assisting with the local Apache. Carter escaped his jail with Powell and company chasing close behind. Unfortunately, Carter ran into a group of Apache warriors, and a firefight broke out between the Army men and the Apache, wounding Powell as he and Carter ran away. Forced into a last stand, Carter and Powell took refuge in the mouth of a cave, which the Apache dared not come close to. Investigating the cave, Carter found the gold he was looking for, and accidentally met his first Thern, whom he killed in self defense. The Thern started mumbling unknown words with his dying breath, holding a medallion in his hand. Carter took it away from him, and unknowingly finished the action, teleporting him to Barsoom.

From here, his story continues similarly to that of A Princess of Mars with aspects of The Gods of Mars rolled in (i.e. the Therns), though with tremendous artistic license regarding the latter and their role in the story.

John Carter is portrayed by Taylor Kitsch in this movie adaption who is the second actor to play John Carter on screen. This John Carter is portrayed as a hardened, cynical man who has lost everything, and his hero's journey on Barsoom revolves around finding something new to fight for and live for, with slight comedic relief relating to his adaptation to his new, alien world. One major change to the original story is the explanation of Carter's transmission to-and-from Mars through means of a mysterious, alien technology.