An artificial and sexless race created by the mastermind of Mars Ras Thavas, the Hormads resemble Red Martians but are much larger and typically deformed. When Ras created the Hormad, he also created a city on an isolated island in the toonolian marshes called Morbus to serve as a center for the races cultural development.

Hormads appear as the antagonists in the story Synthetic Men of Mars, in which they plan to conquer all of Barsoom. At the end of the story, it is suggested that all Hormads are destroyed by the fleet of Helium. However, in John Carter and the Giant of Mars it turns out at least one Hormad, Pew Mogel, survived and continued their quest for world domination. 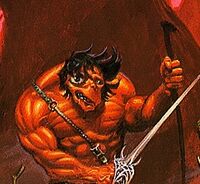 The hormads are very large nearly indestructible creatures (only fire being able to completely kill them apparently), and are grown in vats in massive numbers. They can have all of their limbs severed and even their heads and still survive, the science of Ras Thavas able to make them regenerate their limbs and even whole bodies. Sometimes they will fail to develop a whole body maybe only developing a foot instead. Almost all hormads are deformed in some way, body parts in wrong places, extra toes and thumbs. The severed limbs and bodies of hormads are recycled in the vats, and hormads that fail to develop into functional beings are also recycled.

Most Hormads' names are simply numbers in the Martian language, like Teeaytan-ov 'eleven hundred seven'. Only their leaders give themselves real names.

Black Martian Hormad - John Carter, Warlord of Mars
Add a photo to this gallery
Retrieved from "https://barsoom.fandom.com/wiki/Hormad?oldid=14113"
Community content is available under CC-BY-SA unless otherwise noted.