The Hithers are a people native to mars, not much is known about them other than some specifics of their culture, their relatively human body shape and that they share some sort of connection with the Thither 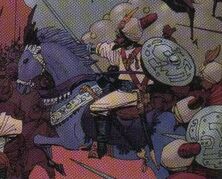 There are a few specific facts of Hither culture that are worthy of note, the Earthman Gullivar found their liquer disgusting (saying it tasted like terpentine). They have a considerable settlement in the ruins of the city of Varnal, a city from the Kane Dynasty which dates thousands of years before the molluscs occupation. According to Hither lore Micheal Kane (leader of the Kane dynasty) was from Negalu (seemingly the Hither name for earth).

Hithers who were apparently loyal to the earthman Gullivar fought alongside John Carter, Green Martians, and the Sorns against the dreaded Molluscs. The Hithers used a powerful cannon of their make to penetrate the Mollusc perimeter. 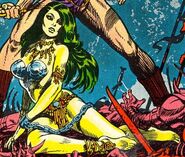