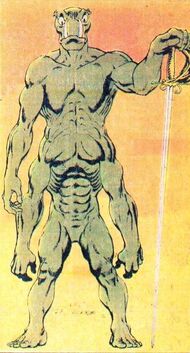 The Green Martians are one of the predominant races of Barsoom. They are green-skinned monstrous reptilian people who stalk the dead sea bottoms. They are intelligent and capable of organizing themselves into a society, but they are almost all to a man brutish and cruel.

The Green Martians are the largest of the Martian races, the males standing up to fifteen feet tall and the females up to twelve feet. They have green skin, small antennae-like ears just above the eyes, and large tusks. In the males these tusks extend upwards to the level of the eyes. The eyes themselves are large and wide-set, with snowy white sclera and blood red irises. Each eye is capable of moving independently of the other. Green women differ in the fact that their skin color is lighter, their tusks extend up to the level of their antennae, and they also have vestigial fingernails.

Like all other Martian humanoids, they are oviparous; newly laid eggs are described as being the size of a goose egg, and the young take up to five years to hatch. The young are miniature replicas of the adults, standing 3 to 4 feet in height when hatched, with yellowish-green skin that darkens as they age. The most distinct trait of the species is their six limbs - two arms, two legs, and an intermediary set of limbs that can be used as arms or legs. Like most other Martian humanoids, the Green Martians go almost completely naked, wearing only a harness and jewelry.

The complete origin of the Green Martians is mostly unknown. They first rose to prominence in the waning days of Barsoom, when the oceans began to recede, and began raiding the cities of the various races (such as the Orovar), driving these once-great civilizations into increasingly remote regions. When the peoples abandoned the cities, the Green hordes took over. Though they appear to have lacked the intelligence to make use of most of the ancient technology left behind, their size, brute strength, and abundance of limbs for many years prevented them from being driven out.

The Rise of Thark

For centuries, the Green Hordes were locked in eternal war with one another, as well as with the Red Martians, and their culture was stagnant as a result. This changed in 1866, however, with the sudden arrival of the Earthman John Carter. Accustomed to the higher gravity of Earth, Carter found that he was capable of bounding over significant distances on Mars, and this gave him an advantage over the Tharks who first encountered him. Eager for an advantage over the hated Warhoons, the Tharks, in a rare moment of wisdom, cautiously welcomed Carter into their ranks. In time, Carter proved his worth, and managed to befriend the Jed Tars Tarkas, and endear himself to the kind-hearted Sola and her loyal hound Woola.

Carter soon fell in love with a Red Martian princess, Dejah Thoris of Helium, who had been taken captive by the Tharks. When he discovered that Sola was Tars Tarkas' daughter, he convinced the ambitious Jed to challenge the Jeddak of Thark, Tal Hajus, who had attempted to rape Dejah Thoris and Sola. Too fat and soft to stand his ground, Tal Hajus died in combat, and Tars Tarkas took his place as leader of the Tharks. When circumstances resulted in Dejah Thoris being captured by the kingdom of Zodanga, Tars Tarkas agreed to lend the full might of Thark to Carter's efforts to get her back, and thus the grateful Jeddak of Helium, Tardos Mors, proposed an alliance. Recognizing the advantage that he would gain over the Warhoons, Tars Tarkas accepted the offer, and thus Thark became the predominant Green horde. 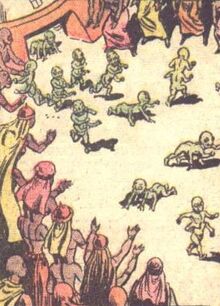 Understanding the culture of the Green Martians can be linked to understanding how they are born and how they spend their childhoods. Each year Martian women bring forward up to thirteen eggs; the eggs that meet certain weight, size, and specific gravity tests are taken to a secret underground vault where it is too cool for incubation to occur. Each year a council of about 20 chieftains examines the eggs, and all but about 100 of them are destroyed, preserving only the most perfect for incubation. Once the five-year hatching period ends, any eggs that do not hatch on time are unwanted (it is also important to note that if one green horde comes across another hordes incubator they destroy it and the eggs inside).

Once born, the large Martian youths are scooped up by women of the community; if any of the children prove deformed or defective in any way they are promptly shot without a tear shed by anyone. The women raise them, the only aspects of their raising being the teaching of language and use of weapons, which they are given during their first year. The erstwhile mothers develop no feelings or attachment to their children - the children belong to the community and as a result parental love is completely unknown to them. From birth, they know no fatherly or motherly love, and they have no concept of the word home; they are taught that they are only suffered to live until they can demonstrate by their physique and ferocity that they are fit to live. It is likely that this horrible system is what resulted in the loss of the finer feelings and humanitarian instinct of the general population of their people.

Of course, one must also understand how they live their everyday lives. The people are barbaric, they have no art and no written language, and have never constructed any structure beyond the necessary incubators. Their sense of humor is cruel, laughing at death and suffering. They are constantly at war with each other, and with the red people. They detest mining and physical labor, and all things of value are produced by the females of the species. Concerning law, they make new laws only as it becomes necessary; a new law for each emergency. They are unfettered by precedent in the administration of justice. Customs have been handed down by ages of repetition, but the punishment for ignoring a custom is a matter for individual treatment by a jury of the culprit's peers.

There are many green hordes across the face of Barsoom, each of them taking the name of the city that they primarily inhabit.

One of the more notable aspects of the green culture is their domestication of many of the various beasts that inhabit Barsoom, and the usage of these creatures in their convoys.

There are three creatures found among the Green Men, the greater Thoats which they use as riding beasts, the great Zitidar which drags their great 3 wheeled chariots, and the fierce Calots which not only serve as guard beasts but also defend the rear of the caravan.

Green Martians are one of the most noteworthy and memorable people of Edgar Rice Burroughs mars series, and thus they get frequent nods and cameos in other works.

Retrieved from "https://barsoom.fandom.com/wiki/Green_Martian?oldid=14789"
Community content is available under CC-BY-SA unless otherwise noted.