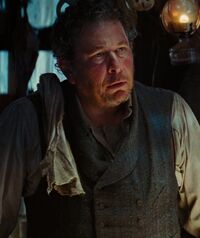 Dix was the general store keeper at the Fort Grant Outpost on Earth in the Arizona territory. He seemed to have a an issue with John Carter who would stocked up on supplies at his store, John Carter owed him a debt and was never capable of repaying him.

Retrieved from "https://barsoom.fandom.com/wiki/Dix?oldid=10092"
Community content is available under CC-BY-SA unless otherwise noted.