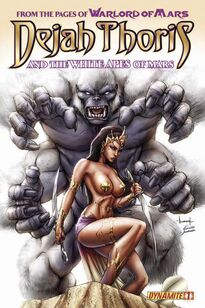 On the way to an archeological dig at an ancient battle site at the "face" of Mars, Dejah Thoris and her party are stranded. They take shelter in a dead, ancient city - infested with killer white apes. Hungry ones. The most harrowing horror story in the annals of Barsoom! Dejah Thoris and the White Apes of Mars is a four-issue mini-series written by Mark Rahner and drawn by Lui Antonio, with covers by Brandon Peterson and Alé Garza.

Dejah Thoris gets her son Carthoris interested in the history of Barsoom by reading him an excerpt from a history book about a troop of warriors that survived a siege by staying in a fort for several days. She plans, due to recent events, to go for a 'field trip' to an archaeological dig to uncover some mysteries of Barsoom's history.

Inviting her friends and bringing some armed guards (her ex-boyfriend's idea), Dejah sets out on an airship. However, in the middle of the journey, it breaks down and the group is forced to seek shelter elsewhere. The adventurers stumble upon an abandoned city and barely get settled in a small courtyard with comfortable chairs before the white apes attack. There are a large number of them and the guards are killed first since they were in the open. The women hide behind a structure and begin to crawl for the nearest doorway to one of the buildings when the apes notice them.

The group of apes start attacking the women until they fall one by one. The handmaidens and one of Dejah's friends are killed by the apes' sharp claws, another one of Dejah Thoris' friends commits suicide and Dejah's handmaiden sacrafices herself to ensure that the apes will not get Dejah Thoris as she crawls down an emergency escape hatch. However, Dejah Thoris' robe gets stuck on a ladder rung just as the apes get past the obstacle.

Retrieved from "https://barsoom.fandom.com/wiki/Dejah_Thoris_and_the_White_Apes_of_Mars?oldid=11333"
Community content is available under CC-BY-SA unless otherwise noted.