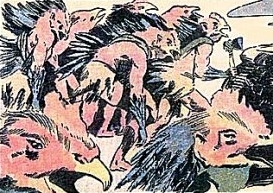 The giant Chicken Men of barsoom were thought only to exist in fables and legend. While attempting to trek to helium in while giant Dejah Thoris was unfortunate enough to encounter them, the chicken-men captured her with the intention of eating her. They speak the same universal language as all of barsoom! The race is apparently primitive, using stone weaponry. They lived in a hidden village in the feather forest.

Retrieved from "https://barsoom.fandom.com/wiki/Chicken_Men?oldid=7047"
Community content is available under CC-BY-SA unless otherwise noted.