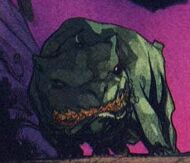 A Calot is a Martian creature that is the world's rough equivalent of a dog, but typically only amongst the Green Men.

These creatures are about the size of a Shetland pony, with ten short legs and a frog-like head, and a small amount of bristly "hair". They are the fastest creatures on Mars, and are excellent at hunting game or guarding property.

Calots have been domesticated by the Green Men who use them for multiple purposes, they use them for guard animals, in their arenas, and to guard the rears of their caravans.

Calots were never domesticated by the Red Men (or any of the various other races it would seem). John Carter when traveling to Zodanga with his companion Woola attracted much attention, he compared it to "Strolling down Broadway with a Numidian lion at [your] heels". As well sometimes the term "Calot" is used in a derogatory manner by the various peoples of Barsoom.

However, John Carter's Woola seems to have started other people thinking of the concept of watch-calots. One nearly catches Vad Varo in Toonol, some fifty Earth years after John Carter's first arrival on Mars.

Not much is known about the behavior of wild calots, they are known to hunt in groups on the dead sea bottoms.

Those who treat their calots kindly will be rewarded with great loyalty; after befriending the calot Woola, John Carter was continually surprised when the ugly brute showed up just in the nick of time to save him from a number of otherwise deadly encounters.

In fact, he found he had to go to great lengths to convince Woola to leave his side so that his beloved pet would not follow him into situations in which he would be more likely than his master to be harmed.

Retrieved from "https://barsoom.fandom.com/wiki/Calot?oldid=14461"
Community content is available under CC-BY-SA unless otherwise noted.