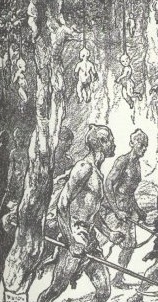 The Brokols are a race native to Amtor. Being one of the races that inhabit the northern hemisphere they are entirely unknown in the southern hemisphere. They have green skin and absolutely no hair, on top of their heads there is a knot that remains from their birth (somewhat similar to a belly button). The females of the species give birth to a single nut which a tree grows from, tiny Brokols grow like fruit upon the tree, the vast majority of these young plants are eaten by Guypals. Not much is known about the diet of these creatures, but they do drink the blood of warm blooded creatures including humans.

The Brokols are the only group of people upon Amtor to have actually developed a religion in any sense. Their religion was focused on a woman that they called Loto-El-Ho-Ganja Kum O Raj which literally translates into 'most high more than woman of the fire' not much is known about her. They worshiped her because she supposedly fell from the fire that surrounds all of Amtor, they believed that she was not born from human or plant. They would perform ritual sacrifices to her.

Retrieved from "https://barsoom.fandom.com/wiki/Brokols?oldid=10337"
Community content is available under CC-BY-SA unless otherwise noted.