Barsoom (better known to Earthmen as Mars, by the inhabitants of Jupiter as Garobus) is the fourth planet in the Solar System, and the main setting of Edgar Rice Burroughs' Martian novels. It is orbited by the moons Thuria (Phobos) and Cluros (Deimos). In the distant past, it bore five seas (oceans?), the largest and mightiest of them Throxeus. Today these oceans are all but dried out, and the planet now has very little water.

There exists a peculiar relationship between Barsoom and its satellites, that does not exist between any other planet and its satellites in the solar system. It was first suggested by an obscure scientist thousands of years ago, and later it was proven. What happens is that any mass approaching the satellites will change in size and mass as to be proportioned the same as they are on Barsoom to the satellite they are now on.

To best understand time measurement on Barsoom, when being explained to an Earthman (or woman), it is best to put it in terms understandable to Earth time first.

Now, with a Barsoomian day being 1.025 Earth days long, and a Barsoomian year being 1.88 Earth years long, this translates out to:

A Barsoomian Year is 670.25 Barsoomian days long.  Even Barsoomians have to have a leap year every four years.  Barsoomians further break down their 'year' thusly:

A Barsoomian year is One Ord.

A Barsoomian Month is called a Teean, and is 67 days long.

The Barsoomian Day is called a Padan.

So an ord is ten teean's long, and each teean is 67 days.  Burroughs never mentioned if the teean's have specific names like on Earth, or where the leap day woud go.

Days, or Padan, are further broken down.

Zodes are also individually numbered, the first of which begins at the dawn of the winter solstice. 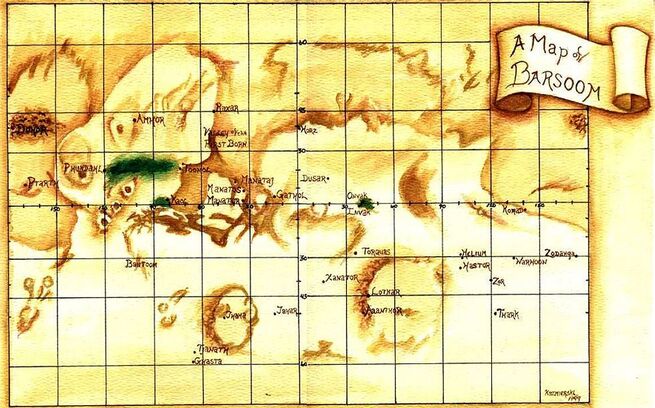 Retrieved from "https://barsoom.fandom.com/wiki/Barsoom?oldid=14033"
Community content is available under CC-BY-SA unless otherwise noted.