The atmosphere factory (or atmosphere plant) is a large and highly guarded installation maintained by Helium. It is responsible for providing the air that sustains all life on Barsoom. The factory utilizes the ninth ray of sunlight, separating it out from the other eight rays using instruments on the factory's roof. The ray is converted into energy and stored in one of several enormous reservoirs, at which point an electrical current is introduced that presumably converts the energy into a gas. It is then pumped to the five principal air centers of the planet where it is released and transformed into breathable atmosphere. There is always enough of the ninth ray stored in the reservoirs to maintain the Martian atmosphere for a thousand years as long as the pumping apparatus remains functional. The building covers an area of four square miles and rises to a height of 200 feet.

Everyone on Barsoom recognizes the importance of the factory (though some people believe the factory is a ruse to keep others subjugated), and its security is considered impenetrable: the factory's walls are one hundred and fifty feet thick, and its roof is covered with glass five feet thick to protect it from assault by aircraft. Anyone misguided enough to try and attack the factory would almost certainly fail.

At any given time there are only two people who know the secret to opening the doors to the factory, which are operated in a series of three, one after another, via a combination of thought waves. These men (a keeper and an assistant) live an almost monkish existence; for 344 days (half of a Martian year), one man will be confined to the isolated factory while the other is permitted to travel. They wear no clothing except for a gold collar from which hangs a diadem the size of a dinner plate. The diadem is set with huge diamonds, and in the center is an extremely rare stone that scintillates all nine rays of light. This ornament serves as a signal to all Martians that the bearer is responsible for maintaining their atmosphere, and thus must be allowed to travel unmolested.

The Yellow Martians also operate their own similar installation in the city of Marentina capable of sustaining the northern pole if the primary atmosphere factory were to fail.

The Atmosphere Plant from John Carter, Warlord of Mars #12 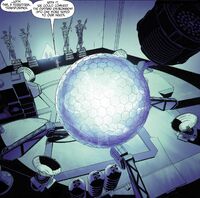 Upperview of the Atmosphere Plant from John Carter, Warlord of Mars #12
Community content is available under CC-BY-SA unless otherwise noted.
Advertisement