The world is concealed underneath two layers of clouds, this double cloud envelope prevents the inhabitants of the world from viewing the stars, the sun, or the other planets. This resulted in an extremely warped view of the planet by the inhabitants of the southern hemisphere. They believe that Amtor is an upturned disc floating in a sea of molten metal, divided into three segments. Karbol the arctic zone is said to be natures natural defense against the sea of molten rock, in reality its the planets south pole. The temperate zone were most peoples live is called trabol. And finally strabol, they believe it to be the fiery center of their world, this is actually the equator. Although surveys of the world provide contradictory data a great scientist name Klufar came up with the theory of relative distance. The equivalent of a month is a twenty day period called an ax, the day of the planet is exactly 26 hours, 56 minutes, and 4 earth seconds long. The Native inhabitants divide this tie into twenty equal units called Te, each 80.895 earth minutes long, and a smaller called a vir approximately four minutes long is used as well. The day begins at the first te, at sunrise. 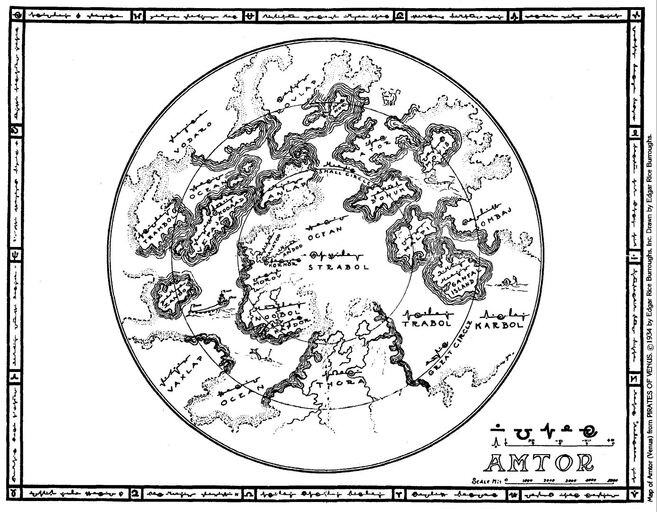 Like Barsoom the inhabitants of the planet share a single language.Though a variety of people inhabit the world there are a few cultural norms carried across these people. Generally the people have no concept of god or any sort of deity whatsoever, the only exception are the Brokols.

For a long time Vepaja was the dominant nation that inhabited the southern hemisphere, but this great country was overthrown by the thorist's.

Retrieved from "https://barsoom.fandom.com/wiki/Amtor?oldid=14184"
Community content is available under CC-BY-SA unless otherwise noted.