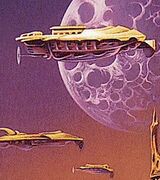 Airships are the flying ships of Barsoom, used for transport and warfare by the natives. They are commonly referred to as fliers, but occasionally are also referred to as planes.

The fliers were developed using the 8th ray, and are sustained by the rays stored within buoyancy tanks. A flier can take off and land vertically in an area only slightly larger than the flier itself. The ships engines are run using a marvelous concentrated martian fuel.

Larger fliers are moored to the ground using four deadmen cables, two on the bow, and two on the stern. Usually these are dug up and taken aboard when the flier launches, but when the flier needs to leave in a hurry they can be cut.

900 years before John Carter's advent on mars the first great battleship was built in Helium, but it had too great a quantity of the 8th ray. It sailed up into space with five hundred officers and men, never to return. It can still be seen with the aid of telescopes, a tiny satellite that will encircle Barsoom till the end of time.

The ground fliers are an innovation unique to the Okarian domed cities of the northern pole of Barsoom. They are the only form of artificial transportation used in that region and travel along the ground like the automobiles of Earth. They are light and noiseless, and their broad tires are rubber-like bags filled with the eighth ray or ray of buoyancy, just enough to give the vehicles traction for steering purposes. The back wheels are geared to the engine and assist in driving the machine, but the bulk of this operation is performed by a small propeller at the stern.

The appearance of ground fliers in Helium in the novel Thuvia, Maid of Mars indicates that John Carter may have introduced the technology to the Red Martians following his adventures in Okar (detailed in The Warlord of Mars). These fliers usually travel along the ground but are also capable of rising into the air in order to pass slower moving vehicles ahead of them, or at intersections where the north-south traffic has the right of way and those going east and west must rise above it.